One of our customers needed a solution to a 10-year-old mixing issue that was driving up operation costs in their facility. The process involves producing a water/polyvinyl acetate emulsion mix that is used as a bath for premoisturized fabric to be coated. The fabric coating requires an extremely consistent mix, and their existing equipment was unable to control the density accurately. It was not capable of responding to disturbances on-the-fly, and the mix density would often drift over the line, leading to defects or scrap products. As a result, they were forced to start using premixed fluid which drastically increased production costs.

Anderson Process set out to engineer an advanced control/pump system to improve bath mixture repeatability and consistency for the customer. The system needed to have precise control of the bath concentration and have dynamic density control that could adjust to changes in the closed control loop. Such a system would allow the customer to circumvent the expensive pre-mixed fluid while reliably producing consistent batches.

The illustrations show the mixing kinetics of this process. The top image shows the dynamic mixing, where water and glue flow rate are controlled by feedback loops to maintain the fluid level inside the tank and the mix density. When more glue is needed at various intervals, the water level is decreased. The second illustration shows a more traditional batch control mixing. In a much less effective effort to keep density with a fixed glue dose, water is simply turned off for a period of time in an attempt to put the mixture back in balance. 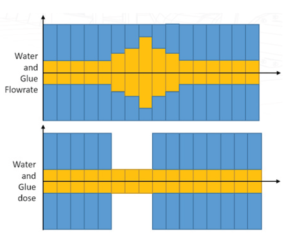 This more adaptive control process is saving the customer $10,000 every week by reverting to a traditional (non-premixed) mixing process. Production rates have also increased by 25% due to system efficiencies and the elimination of defective products. At this rate, the customer expects the system to pay for itself in less than 8 months.

The system used a progressive cavity pump designed for mixing fluids with high viscosity disparity. The pump contains a rotor and stator that allow mixing in intervals projected perpendicular to one another. Higher viscosity fluid likes to move toward the outer diameter, where flanges oriented in opposite directions ensure all fluids are mixed evenly. Along with the pump, there is also a positioner valve, variable frequency drive, Coriolis mass flowmeters, high-accuracy density meter, static mixer, injector, and tote heater to monitor and maintain a consistent mixture density and temperature.

The control aspects of this project can be applied to many other chemical mixing applications. As demonstrated in this case, implementing these sophisticated systems can streamline production and offer an immediate ROI, making them easy upgrade decisions in any facility. Our engineers can work with you every step of the way to ensure you find the right equipment that provides the returns and efficiency your operation needs. Contact us today to discuss your application requirements, and see for yourself how Anderson Process can deliver a comprehensive system to improve your bottom line.